But if you spend time with me, you’ll know that I treat her like one.

Mabel has a voice. It’s a cross between Kristen Chenowith and Smurfette.

Mabel has a bed. And it’s called mine.

Mabel has a wardrobe. Pink collar for spring. Purple for fall. Hearts for valentine’s day.

Mabel has a favorite toy. Patriotic chicken, but NOT the one missing its beak.

Mabel has a crush. She tinkles on Winston’s yard to let him know she’s around.

And Mabel has a personality. A BIG one. She’ll flash those stink eyes anytime you ignore her tennis ball in the yard.

Friends have told me that dogs are fairly insignificant once you have kids. And since I don’t have kids, it is hard to argue. But doggone it, I love my pooch. If she’s not family, then I don’t know who is. 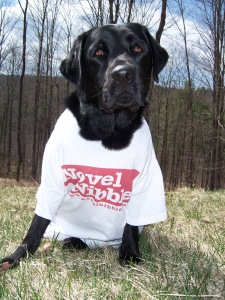